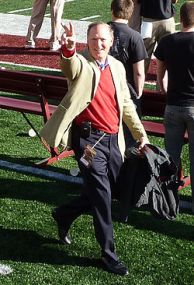 My Twitter feed since 2010 says Pat Haden was a lousy athletic director who fumbled more times at USC than he did as quarterback of the Los Angeles Rams.

Haden was the AD who failed to overturn the outrageous NCAA sanctions he inherited from the equally outrageous Mike Garrett.  Haden pussy-footed his way around the NCAA when a real Trojan would have busted down the door and demanded a “mea culpa” from president Mark Emmert.
END_OF_DOCUMENT_TOKEN_TO_BE_REPLACED