SCOTTSDALE, Az.–What an exciting Friday it turned out to be in advance of Monday night’s college football national title between the Alabama Shakes and Clemson Clovers.

Just think of how much better it would get, one thought, once the teams and good weather actually arrived.

It was fifty shades of grey and rainy in Phoenix, prompting a heartfelt apology from Tom Chambers and the chamber of commerce.
END_OF_DOCUMENT_TOKEN_TO_BE_REPLACED

Rankman took a break from ark building in advance of El Nino to recap a 40-game bowl season that seemed to last 40 days and 40 nights.

A few observations from the flight deck:

Rankman watched all, or parts, of 40 bowl games over the course of the holiday season and then checked himself into a medical facility loosely named after a low-polling Republican in the presidential race: “Rick’s Sanatorium.”

The bottom line is the second year of the College Football Playoff, compared to the first, tanked.  Ratings were down 13% for the New Year’s Six games and the semifinals drew 12.5 million fewer viewers than last year.
END_OF_DOCUMENT_TOKEN_TO_BE_REPLACED 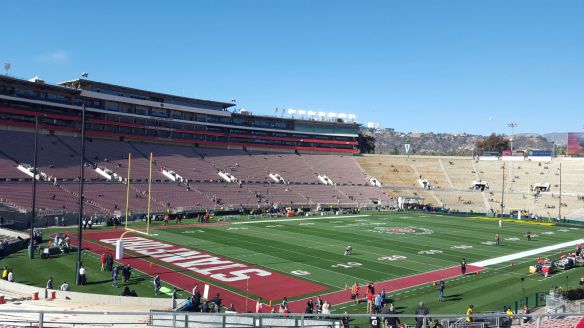 The “almost” team from the “not quite”conference put on quite a performance in Friday’s Rose Bowl.

Donald Trump, though, would look at the big picture and say “Loser.”

Christian McCaffrey, the guy who would have won the Heisman Trophy had it been voted on Friday night, led a Stanford team that would have been in the playoff had the committee met once more Saturday morning.

Stanford proved, in its 45-16 win over Iowa, that it is one of the four best teams in the country. McCaffrey set a Rose Bowl record with 368 total yards but won’t get a Heisman recount.
END_OF_DOCUMENT_TOKEN_TO_BE_REPLACED