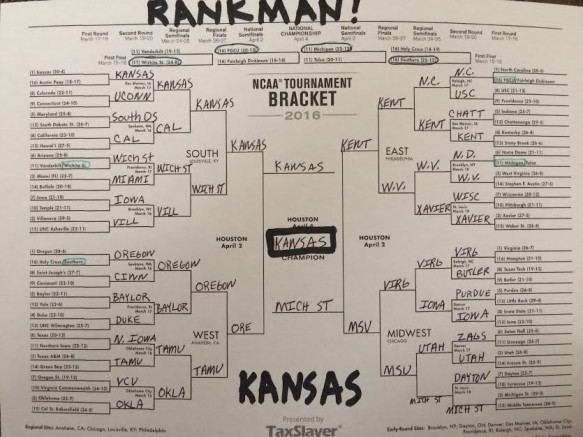 College basketball is really two sports. There is a serious regular season where pundits pore over the teams and offer insightful, incontrovertible analysis.

And there is the NCAA Tournament, which is like the dime toss at your church’s harvest festival.

It’s nice to know, actually, that your dog “Spot” is as well equipped to pick the winners as SI’s Seth Davis.

If the NCAA was like the NBA, which produces the best true champion because playoff winners are decided in a best-of-seven series, the tournament would be worth agonizing over.

The best teams would almost always win. Single-elimination, however, makes the NCAA tournament a crap shoot in which one bad official’s call can ruin your spring break.

The tournament is more of an event than a competition, but that’s fine and also very fun.

This year’s field appears more wide open than ever, which is why Rankman wasted little time (15 minutes) breaking down his bracket and picking the winners.

Why take more time and risk being late for hot yoga?

“The last few years, there’s been at least one, possibly two or three pretty elite teams that factored in for being in the Final Four,” Jay Rood, VP of the race and sports books for MGM Resorts, told the Los Angeles Times. “But I think you could make a case for easily 12 teams this year and possibly more.”

In other words: guess away. Stick to some basic guidelines and lean toward the higher seeds, but also don’t be afraid to consult with an astrologist.

Use this chart to help you through the first round of games.

Early retirement has left Rankman consumed with his stamp collection, bird watching and watching paint dry. He hasn’t had much time to intensely study the teams or the tendencies.

And it won’t decrease his win percentage one Iona. When in doubt go with coaches you respect or like. The coach at Michigan State, Tom Izzo, is way more important than the players. And forget Kentucky’s record or seeding: John Calipari is the coach and he recruits better than that old poster of Uncle Sam.

The bottom line is to have fun and let Aunt Martha have the last laugh when she wins the pool against a field of talking heads on TV.

1 thought on “Rankman picks his NCAA field and prays for a good harvest.”