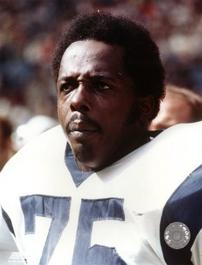 Favorite Rams 10-1
10. Fritz Shurmur. This pick involves at least two damn shames. One is that Fritz died too young and the other, at least for Rams’ fans, is that he won a Super Bowl ring with the Green Bay Packers’ coaching staff. Fritz was one of the underrated defensive minds of the 1980s even though his “soft” zone concepts ran counter to the macho “46” Buddy Ryan made famous. Buddy didn’t care much for passive ideas but Fritz got the last laugh when the Rams’ sissy zone stopped the Philadelphia Eagles cold, 21-7, in the 1989 NFC Wild Card game. The Eagles were coached by…Buddy Ryan. The name of Shurmur’s defense, which featured two down linemen and five linebackers?  It was called “Eagle.” It remains one of the best game plans ever implemented by a coordinator.

9. Jon Arnett. The golden-boy halfback out of USC joined the Rams in 1957, a year before Rankman was born. He is on this list for a very specific reason. My mother regaled me for years with stories of the time Arnett asked her out on a date when both were students at Manual Arts High School. She declined. I used to say, “Mom, are you nuts, I could have been the son of Jon Arnett!” Wait a minute…

8. Jack Snow. This falls under: never meet your idols. One day Rankman entered the press room at Rams Park to find Snow sitting in my seat, smoking a cigarette, with his feet propped up on my desk. He was using my phone and spewing obscenities. Jack Snow! He was a boyhood idol, No. 84, catching bombs from Roman Gabriel. I told Jack to take a hike, you know, go deep. (Note: most of this story is true. The last sentence may have been embellished for dramatic impact).

7. George Allen. This isn’t complicated. Allen rescued the Rams from mediocrity in the 1960s around the time I became a Cub Scout. Allen was my dad’s favorite coach and I’ll never forget attending games with my father at the Coliseum. After the Rams went 10-3-1 in 1968, owner Dan Reeves fired Allen. What? Reeves said losing with previous coach Harland Svare was more fun than winning with Allen, a stubborn, idiosyncratic man who liked to trade future draft picks for aging, veteran players. The players revolted, though, and Reeves was forced to hire Allen back.  The Rams ended up hiring and firing Allen four times.

6. Jackie Slater. He was the blood-and-guts of the Rams’ teams I covered, as solid and professional as the day was long. Jackie Ray Slater blocked for Walter Payton at Jackson State and for Eric Dickerson in the NFL. Slater moved mountains at tackle because he was a mountain of a man. I guarantee you this: his election to the Hall of Fame took five minutes longer than it should have.

5. Tom Fears. This one is personal. In 1994, I interviewed Fears at his home in Palm Desert as he was entering the early stages of Alzheimer’s disease. He was a receiver so great that he didn’t need a nickname. Fears was mad that he was starting to forget a life that never should have been forgotten. “It’s embarrassing,” he told me of his memory lapses. Fears died in 2000. He would be happy to know his memory still lives. Fears once caught 18 passes in a game and was the receiver who, in 1951, caught the game-winning pass in the only NFL championship ever won by the Los Angeles Rams.

4. Dennis Harrah. Rule of thumb for NFL beat writers: if you want to know what’s going on under the hood of a team, talk to the offensive linemen. Harrah combined trench-warfare wisdom with a West Virginia sense of humor that kept everyone laughing even during the bitter 1987 players’ strike. Harrah played guard for 13 seasons and was the self-proclaimed leader of the “Pie Faces.” He once astutely and accurately declared after an ugly win: “We’re in first place and we stink.”

3. Jack Youngblood. Here’s a testament to his greatness, above and beyond playing in a Super Bowl with a broken leg. Youngblood replaced Deacon Jones at left defensive end and we hardly noticed any drop off. He was a man’s man and the hood ornament for the organization long past his playing days. Jack was a boyhood idol I actually got to cover at the end of his career. Lucky me. Shame on voters for making him wait so long to get in the Hall of Fame….

2. Roman Gabriel.  I was 11 during his 1969 MVP season. Gabe was a god who represented all that I could never be–tall, tanned and talented. He was my first man-crush and for a period approaching puberty he made me temporarily question my sexuality (not that there’s anything wrong with that!). Gabriel was the perfect quarterback, for the perfect team, in the perfect uniform, at the perfect time.

1. David “Deacon” Jones. He is responsible for the head slap and the quarterback “sack” and thankfully only one of them has since been outlawed by the NFL. One of my five best days as a kid was getting randomly handed uniform No. 75 before the beginning of my Pop Warner season with the La Habra Rockets. Ha. I even earned “lineman of the year” and cherish what’s left of the hand-painted figurine, No. 75, I received at the team banquet.