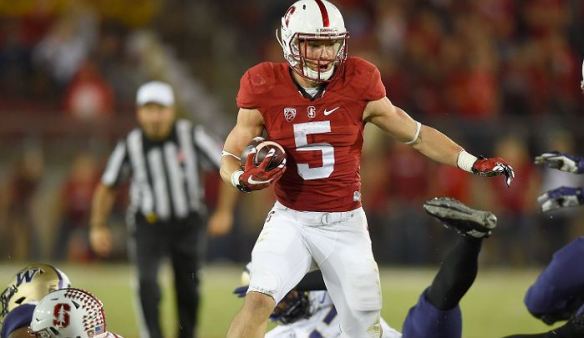 I tried all week feigning outrage over Stanford tailback Christian McCaffrey’s inevitable Heisman Trophy snub on Saturday night.
…How Dare They!
My preparatory work involved watching talking-head cable shows in which celebrity squawkers take positions they don’t believe—but act like they do.

Radio also provides many middle-aged men pontificating in deep, authoritative voices sharpened by years of preening in front of bathroom mirrors.
You can earn vacation-home money taking stands for, or against, things you had not even considered the day before.

A colleague calls this “soulless conviction” journalism.
It pays really, really well, but if you look or listen hard you can sometimes see, or hear, the guy talking out of one side of his mouth and cashing checks with the other.
I tried to be THAT GUY this week with McCaffrey but ultimately failed my own BS detector.
After careful study I determined McCaffrey not winning the Heisman Trophy was no worse a travesty than, say, putting mayo on a hot dog.

It was just a damn shame.
The same could be said for Clemson quarterback Deshaun Watson, who also had a fabulous season.

The inevitable became reality when Alabama’s Derrick Henry won the Heisman by a comfortable margin over McCaffrey and Watson.

Bottom line: this was a lousy year to have a great year. McCaffrey would have have been a slam-dunk winner over John Huarte in 1964 or Eric Crouch in 2001.

Any of this year’s top three candidates would have been worthy winners. Shoot, Baker Mayfield (Oklahoma), Keenan Reynolds (Navy), Zeke Elliott (Ohio State) and Leonard Fournette (LSU) had break-out seasons but couldn’t even get invited to New York.

That doesn’t mean that bias wasn’t involved and the West Coast didn’t get disadvantaged again by its time zone, CBS and the SEC.
McCaffrey turned in the greatest single all-purpose season since 1988 and Barry Sanders, who turned in what many consider the greatest single season in college football history.
Sanders cruised to the Heisman over USC’s Rodney Peete and UCLA’s Troy Aikman.
McCaffrey wasn’t even the closest Stanford player to finish second to an Alabama tailback. That was Toby Gerhart, who lost in 2009 to Mark Ingram by 28 points, the closet margin in Heisman history.

Yet, McCaffrey broke Sanders’ all-purpose record and still didn’t get to touch the Heisman.

So how did McCaffrey not win?

His fate was sealed Nov. 7 when Stanford played a 10 a.m. Pacifc Time game at Colorado on the seldom-seen Pac 12 Network.  It was the same day CBS was set to give the award to LSU’s Fournette in a prime-time game against Alabama.

When Fournette was stuffed, though, CBS quickly flipped the switch and anointed Henry, who had a terrific night.

McCaffrey had thrown for a touchdown pass earlier that day but no one saw it. But that was no match for Henry running  roughshod over LSU and Danielson declaring him the new Heisman leader.

It was so presumptuous, yet so true. McCaffrey had been reduced to a proverb: “If a Stanford Tree throws for a touchdown in a Boulder forest, does anyone hear it?”

Stanford tried to mount a McCaffrey campaign after that, but it was too late. Henry took the Heisman lead and did nothing to lose it.

He ended up breaking Herschel Walker’s SEC single-season rushing record. He continued to lead an Alabama team streaking toward the playoff. He carried 90 friggin’ times in his last two games.

McCaffrey continued to do amazing things in the West while Heisman voters slept in the East. Some filed their ballots before McCaffrey amassed 461 all-purpose yards against USC in the Pac 12 title game.

While all that might be regretful, it should not discredit what Henry did.

John Elway, despite being recently voted the Pac 12 offensive player of the century, finished second in 1982 because the winner was Herschel Walker.

Gerhart probably has the biggest gripe over his close loss to Ingram in 2009. The brilliant Andrew Luck, though, had the unfortunate Heisman luck to be competing against the equally brilliant Cam Newton and Robert Griffin III in consecutive seasons.

Mark this down: No player will again will do what McCaffrey just did and not win the Heisman, unless it’s McCaffrey in 2016.

Friday, on an ESPN’s College Football Live show, Desmond Howard and Kirk Herbstreit were discussing Fournette’s displeasure at not even being invited to this year’s ceremonies.

They told Fournette to keep his head up because he is going to be the clear-cut front-runner next year, even though McCaffrey (and Watson) are returning.

But hey, they said it on TV, so it must be true.