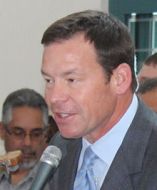 No, wait, forget that headline. Jim Mora vs. Rick Neuheisel would actually make a better toilet paper commercial, you know, which is softer?

Mora could pour a pitcher of pomegranate juice on his sturdy two-ply to the gasps of a semi-live studio audience in Studio City.

The juice would repel like water off an Oregon Duck’s back and Mora would say, “See? This is tough stuff.”

Mora would then soak a sheet inscribed with UCLA’s 2011 schedule. That was the year Neuheisel was fired after, well, winning the Pac 12 South. But that’s long story.

Neuheisel’s paper would turn into a soppy mess, an apt description for his coaching tenure in Westwood.

Welcome to February, folks, a month so devoid of real sports news a controversy had to be concocted this week pitting Mora vs. Neuheisel on competing radio shows.

It started when Mora went on Colin Cowherd’s show and repeated what he said when he took over the UCLA program: it was soft.

Neuheisel responded on his own show by saying Mora is a puffed-up blow fish who thinks getting “tough” is changing the uniform colors to black.

The bad news: this is Leap Year so this could go on all month plus an extra day.

Rankman fact check: Mora has been tougher than Neuheisel at UCLA but the real truth is both cut checks at an institutionally “soft” program. It starts with a campus so beautiful it’s hard to concentrate on being mean when all you really want to do is write poetry and chase butterflies.

The uniforms, after all, are powder blue. UCLA is hard-wired for cushy as the kid brother to Cal in a bureaucratic system that has produced a long line of civil servants and technocrats. Change comes slowly, usually after a signed petition or a peaceful demonstration.

UCLA’s football hires, since Red Sanders, have mostly been a succession of in-house coaches who were expected to succeed, on the cheap, for the love of school (but not money). Any coach who complained was shamed with a Jackie Robinson story, or a signed copy of John Wooden’s last contract.

The last two athletic directors, Peter Dalis and Dan Guerrero, have been passive types who did not like conflict. The last ball-busting AD at UCLA was J.D. Morgan, but that was almost two Sam Gilberts ago.

UCLA’s basic, socialist DNA has made it difficult for any coach to compete against the crosstown rivals at the University of Ayn Rand.

Neuheisel did fail as UCLA coach with seasons of 4-8, 7-6, 4-8 and 6-6 in part because he didn’t have the full backing of the administration. He was a Bruin expected to do the best with the little he would always be given.

Mora had the advantage of coming in as an outsider with a reputation for being a little kooky. Turns out he was just what UCLA needed to take Neuheisel’s recruits and turn them into 9-5.

Mora could do what no in-house Bruin dared to do: leverage his success and use the mere threat of leaving for the NFL to gain substantial upgrades and pay raises for his assistants.

Mora commanded respect because he didn’t really give an eight-clap and wouldn’t stay around just to be a loyal soldier.

It’s also fair to say UCLA didn’t look very tough skidding to this year’s 8-5 finish. The Bruins didn’t show much back-bone against USC, or after jumping out to a big lead against 5-7 Nebraska in the bowl game.

That looked more like UCLA of old: “Hey we’ve got this sewn up, where’s the party after the game? ”

Neuheisel could argue he’s actually led a Pac team to the Rose Bowl that didn’t also play its home games there. In 2000, remember, Rick spearheaded the Huskies to a Rose parade victory over Purdue.

Mora also inherited Brett Hundley at quarterback. Neuheisel, in 2008, inherited Patrick Cowan and Ben Olsen, both of whom were injured on consecutive plays in spring practice.

Mora could say the Pac 10 in 2000 was a much weaker league. USC was coached by Paul Hackett.

Neuheisel could counter he joined UCLA at the back-end of the Pete Carroll dynasty. He could say winning big at Washington proved what you could do with an administration that supported you until you started betting in a NCAA Tournament pool.

Rankman could really unload with a harsher war of words on these two guys but, in the end, he’s just a “softy” himself.