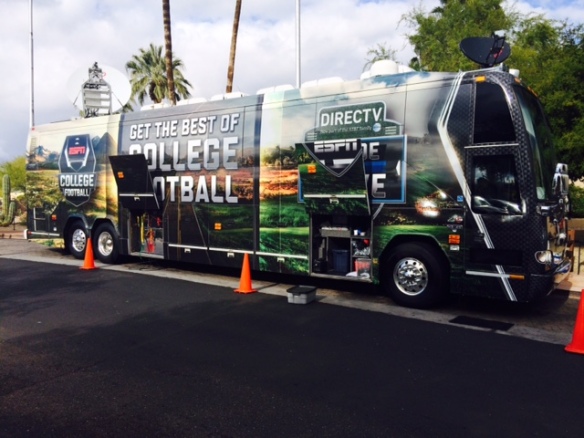 SCOTTSDALE, Az.–What an exciting Friday it turned out to be in advance of Monday night’s college football national title between the Alabama Shakes and Clemson Clovers.

Just think of how much better it would get, one thought, once the teams and good weather actually arrived.

It was fifty shades of grey and rainy in Phoenix, prompting a heartfelt apology from Tom Chambers and the chamber of commerce.

The weather could not dampen Rankman’s spirits as he hauled his family into paradise on Earth–the Camelback Inn in Scottsdale.

We rented a car in Ontario and chased the weather all the way to Phoenix, stopping in Blythe for Mexican food only to discover a lovely city lacking only better placement on the map.

Top highlights so far: Seeing Tim Tebow roaming the resort grounds and ESPN’s Tom Rinaldi in the media hospitality lounge. There just had to be a way to get these two together for a touching story that ended in tears.

Wait, that was the Dow Jones and the S&P 500, but the down turns seemed related. Bill Hancock, executive director of the College Football Playoff, turned out NOT to be the smartest guy in the room as he tried to explain the ratings dip in Year Two of the playoff.

It wasn’t his fault. Hancock was giving his drop report as the 6-foot-7 Pat McInally stood tall in another room as one of 14 new members of the College Football Hall of Fame.

McInally is the smartest guy in most rooms. He was raised in Southern California and graduated Villa Park High School before heading off to Harvard to start an extraordinary life.

McInally earned first team All-America honors as a receiver\punter in 1974 and was drafted by Cincinnati (fifth round, 120th overall) in the 1975 NFL draft.

McInally had a fine pro career, mostly as a punter, but he became better known for being the only NFL player in history to score a perfect 50 on his Wonderlic intelligence test.

“It’s my intellectual annuity,” he joked to a small group of reporters.

How good is perfect? Wonderlic estimates only one person in 16,000 records a perfect score. McInally never tires of being associated with his most stunning NFL feat, yet is also glad people now know he also did something else.

“This is so great,” he said. “I became a football player again today.”

Ok, enough about that–back to this Wonderlic thing. McInally says he didn’t know the test was a big deal. To him, it was just one of many he took before the NFL draft.

He didn’t even know he had a perfect score until it was later reported in the newspaper. There are plenty of sharp NFL cookies out there. Quarterback Ryan Fitzpatrick (Harvard) and Greg McElroy (Alabama) scored 48. Aaron Rodgers and Matt Leinart both scored 35. One became a star NFL quarterback while the other became an older Matt Leinart.

McInally said he took the test again a few years ago, at the urging of his family, and scored 49. His only miss was a question about the solstice. The hardest part of the test has to be only getting 12 minutes to complete it.

McInally now has another calling card: hall of famer. Congratulations to Pat.

College football doesn’t look nearly so smart after it saw a huge ratings decline this year after putting the two national semifinal games on New Year’s Eve.  The Cotton Bowl received a 9.9 rating while the Orange scored a 9.7.

“I was surprised,” Hancock said of the dip. “They were more than I anticipated.

Hancock, though, said there is no plan to alter the plan. The semifinals will be on New Year’s Eve two out of every three years in the 12-year contract. Hancock said it was too soon to know whether this was an aberration, or a trend.

No one has the perfect plan to fix this.

Hey, maybe they should have asked the smartest guy in the room. Wasn’t he standing only a few feet away?

3 thoughts on “Only thing missing from champ game hype: two teams and the sun”